OUT NOW: MY HEART by Else Lasker-Schüler 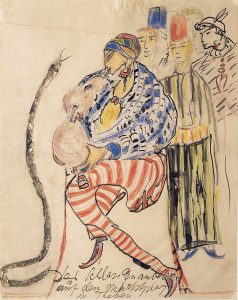 Else Lasker-Schüler’s MY HEART: A NOVEL OF LOVE (originally published 1912) is out now in the first English-language translation to appear to date, prepared by Sheldon Gilman and Robert Levine. This edition is based on the original text as it appeared in the journal Der Sturm in the years 1911-1912.

The Berlin you’ve been looking for is not that of Herr Issivoo, not that of Herr Bowie and not that of Herr Cave, and cannot be found in Kreuzköln, Friedrichshain or Schöneberg; it is the Expressionist city dreamt up here by Else Lasker-Schüler, ‘the greatest poetess in Germany’ in the words of her friend Gottfried Benn. Let this novel in letter form take you straight to the heart of one of Berlin’s most fascinating and artistically vibrant periods – and meet the leading members of the avant-garde centred around Der Sturm and the legendary Café des Westens, including luminaries such as Oskar Kokoschka, Karl Kraus, Alfred Döblin, Arnold Schönberg and Karl Schmidt-Rottluff. To give you a taste of this this seminal work of Expressionist literature, this is the opening passage:

That little Kurt has taken you with him to Sweden, Herwarth, is certainly the act of a friend. Little Kurt will become chief public prosecutor and nothing can happen to you. But something can happen to me; I have no one to whom I can tell my adventures except Peter Baum, who, however, is moving out of his old place into a new one. In his confusion he carried his Matja instead of his writing table into the moving van, entrusting the moving men not to tear the tassels. In the evening I first told him my new love story. For I have never been as much in love as I am this time. If it is of interest to you: the day before yesterday I went to the Luna Park with Gertrude Barrison, quietly slipping into the Egyptian exhibition, as though we had a premonition of something sweet. In a coffee house Gertrude caught the attention of an Arab with a full beard; she was totally horrified at my suggestion to flirt with him. I had, you see, gazed at the curl of his lips, which had now stiffened in response to the coolness of my companion. Her reluctance bothered me very much. But during the belly dancing one of the miracles of my Arabian book happened; I danced with MINN, the son of the sultan of Morocco. We danced, danced like two dancing snakes, up on the Islamic stage, shedding our skins to the enticing tones of the bamboo flute of the snake charmer, lured on by the drum of the ancient Pharaohs, with the eternal bells. And Gertrude also danced the craquette, but like a muse, not as Muslim-like as we; she danced with graceful, provocative arms, her fingers waving like fringes. But he and I suddenly found ourselves on the way to Tangiers, shouted war-like cries, until his mouth kissed me so gently, with such ardor, that I would have felt awkward resisting. Ever since I have loved everyone whose skin color has a trace of his skin color, reminding me of his gold brocade. I love the Slav, because he has brown hair like Minn; I love the bishop, because the ruby in his tie is made of the red dye with which my royal Muslim paints his nails. I cannot, without burning, think of his eyes; narrow, meandering rivers, shimmering irises, whose bed is the Nile. What should I do? The management of the Luna Park, apparently having become suspicious, has forbidden me to enter the park. You see, yesterday morning I brought my wonderful friend a large diamond – yours, Herwarth; are you angry? – together with a bag of cocoanut candies. Suppose I really had some money now! And I have written a firm letter to the Luna Park, that I would report the insult inflicted upon me to Voss, that my name is Else Lasker-Schüler, and I had supplied occasional verse for the Khediv at the reception of European crown princes. What good is it that they let me in now – a detective is always following me, but Minn and I meet at the Zulus, who live, black and wild, in the seamy area of the Egyptian exhibition, which no white man ever sees. I got into this mess because of the impresario, who treats the Muslim people like slaves, and I shall kill him with my dagger, which I bought in Minn’s land. He is the youngest that the slave-trader brought to Europe, he is son of the son of the son of the most youthful looking father in the Egyptian Luna garden. He is no slave, Minn is a king’s son, Minn is a warrior, Minn is my biblical playmate. He wears an arrogant satin gown and he dreams only of me, because he has kissed me. Little Kurt, friend Herwarth, would that you were here, no one will go with me to Egypt; yesterday a marriage was announced there on all the billboards. Can it be that he got married?

Just think, I looked at the moon on the Weidendammer bridge for twenty cents. I got only a very shadowy acquaintance with the people through the telescope. One man had his hair cut like you, Herwarth, or should I say not cut off. Are the working people on the moon also always asking you to cut your hair? And I saw a gentleman with a briefcase eating bread with roast beef, who looked like you, little Kurt. And really, there is a café on the moon; it was night, from inside the café I heard a voice like Dr. Caro’s singing: ‘Then let us speak again of love, as once in May’.

I have fallen permanently in love with the Slav – why – only the stars know. I love him in an entirely different way from the Muslim, whose kiss still sits, a golden butterfly, on my cheek. But I would like to look at the Slav as though I were looking at a painting based on an old master. His face has the color of fire, I burn when I look at it and am drawn inexorably to it. You need not worry, Herwarth, he has not replied at all to my love letter. I wrote to him: ‘Sweet Slav, had you been on display in the Louvre in Paris, I would have stolen you instead of the Mona Lisa. I would like to look at you forever; I would never grow weary of doing that, I would have them build me a tower, without doors. I would most like to come to you when you are asleep, so that your eyelash did not blink in the frame. I think of nothing else but you and only you and nothing else, as though you were standing in a frame. So beautiful as you were yesterday, you were so beautiful, one feels drawn to steal you twice, once from the world and once from yourself; you hardly know how to deal with your own affairs, you always hang yourself in bad light.’ I assure you again, Herwarth, you need not concern yourself about this, yesterday evening he never once offered me his hand. Someone told me in confidence, he doesn’t want to be at odds with you, he is a writer. What do you say to such cowardice? In his place you would have written back to me, wouldn’t you? You don’t need to come any longer; two nights ago I even dreamt that a polar bear met the two of you north-pole travelers and asked you whether you would permit yourselves to be photographed with him. 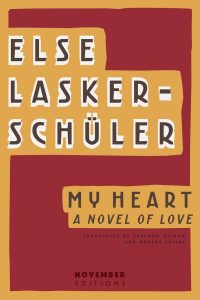